Yang Yoon-Mo and Park Sung-Soo (Dungree) hit their 61th and 8th day respectively at the Jeju prison in South Korea as of April 1st.

You can send a solidarity message to these two non-violent peace workers by emailing them via gangjeongintl@gmail.com 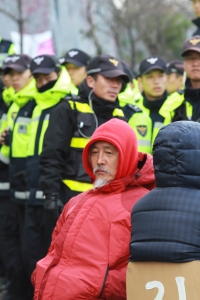 On February first, film critic and one of the longest protestors at the jeju naval base in South Korea, Professor Yang Yoon-Mo was sentenced to one year & six months imprisonment, unsuspended for his peaceful non-violent protest.